We are now up and running again

November  12th To be decided.

December 10th To be decided.

The Cinema Museum – French Sundaes are back!

The Cinema Museum, Elephant and Castle 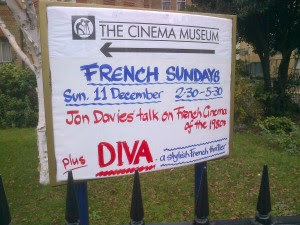 At 2.30 a talk and introduction, a screening of a complete feature, tea and cakes and a chance to see some of the amazing exhibits at the lovely Museum

PDF of summer term 16 choices as an example

One week the class watch on line or visit a film  and the next week discuss it.

A chance to learn more about current trends and become your own critic!

“This class took me to films, play and even places I would never have been to by myself – really exciting.’

Held at Morley College itself. Book now for January 2022

Video of how the class works

Other courses, KS3, A level, Film Societies etc. by arrangement.